Microscopic variations in friction materials can have non-desirable effects on vehicle braking systems and consumer perception of the brake behavior and response. High levels of wear-and-tear on brake rotors, adverse deceleration performance, and dangerous temperature levels can result from such variations. Other flaws might include excessive noise, vibration, or odors during brake application. Pedal feel, brake ABS, traction control, and the system's compliance during electronic stability control maneuvers may be influenced by the compressive behavior of the friction materials.

If impacts such as these occur as a result of microscopic variations in friction material, then testing those variations must be done with microscopic precision. Up until early 2014, resolutions of 0.5 µm and accuracies of 10 μm or more were the standard. That was before Link Engineering released the Model 1620H Hydraulic Compressibility Machine, which was granted full GM approval earlier this year for the GMW15334 procedure.

The history of the Model 1620H has its origins at the SAE Brake Colloquium of 2009 where an industry leader in brake pad engineering explained the need for compressibility machines with 0.1 µm measuring capabilities (…1/250th the width of the average human hair). His thought process was to better support brake caliper design, brake corner performance, and to feed simulation models for ABS, traction control, and disc thickness variation.

Initially, the industry consensus not only determined the notion irrelevant, but downright improbable. Link Engineering Chairman and CEO, Roy Link, initially had his doubts as well. Yet the engineer wasn't just splitting hairs with the idea. He was on to something. With a bit of nudging, Link put together a team of the company's brightest engineers to meet GM's challenge and to support a SAE Task Force. For months, the team met to brainstorm ideas.

"We would come up with ideas and tell each other why it wouldn't work," said Carlos Agudelo, Link Engineering's Director of Technology Development for Testing Services. "Then, we decided to stop talking about it, roll up our sleeves, and do it."

Several design changes were made to the, then, standard compressibility machine in order to achieve the level of precision being requested. The team removed the machine's pneumatic system, allowing stiffer hydraulic oil force to provide increased control accuracy. The heavy loading block is now lighter to allow for a 30 Newton pre-load. They also gave the model a longer stroke cylinder to allow for a wider range of sample thicknesses; including some brake lining for drum brakes and drum-in-hat parking brakes. The result of such changes took testing accuracy from 0.5 µm to 0.1 µm while maintaining machine-to-machine variations under 3 μm using actual friction materials. Engineers enhanced platen temperature control from the standard 400° C. and can now maintain temperatures from ambient to 600° C.

According to Davis, "This new compressibility machine is a huge step forward in microscopic testing. It offers our customers unparalleled repeatability and accuracy while simultaneously increasing testing throughput."

A new 1620H system was provided to a third party for further assessments and full development of the upcoming SAE J3079 recommended practice. Today the stats are in and engineers are pleased with the 1620H's precision and looking forward to future developments of the 1620H system.

Link Engineering Company operates the largest brake laboratory in the world, offering versatile testing capabilities, growing with these recent additions that are now... 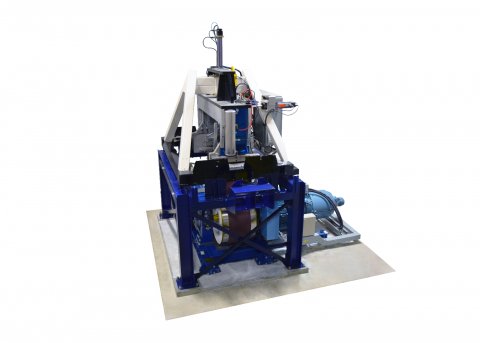