Pat’s Run is a 4.2 Mile Run/Walk honoring Pat Tillman, an American football player who left his professional career in the aftermath of the September 11th attacks to enlist in the United States Army. An Army Ranger, Pat served several combat tours in Iraq and Afghanistan. Tragically, Pat died in the mountains of Afghanistan from a controversial friendly fire incident. The proceeds from Pat’s Run directly support scholarships for Tillman Scholars. Tillman Scholars are military veterans and spouses who wish to continue their education and share Pat’s thirst for service, learning and action. The LINK team was honored to participate on April 23.

Jerry Shavrnoch, General Manager of LINK Arizona, participated in Pat’s Run well before he joined LINK in January of 2015. Jerry’s passion for Pat’s Run followed him to LINK, where he was able to recruit fellow coworkers to support the cause. For the past two years, our team has participated in the run and shared the experience with our customers from Toyota. The grand event is hosted at Sun Devil Stadium, and attracts more than 30,000 people annually. Jerry is a big advocate for the run, “Pat’s Run is a fun event for a great cause. It’s amazing how so many people can unite for a common goal.” We are proud of our team for taking part in such a great cause, and hope to see more LINK employees participate in the years to come.

Since 2004, the Pat Tillman Foundation has invested over $12 million through their scholarship program available to service men and women. Tillman Scholars honor Pat’s legacy and capture his spirit. For more information on Tillman Scholars, please visit www.pattillmanfoundation.org/scholars

Taking advantage of its relocation from Australia, Chassis Brakes International’s Model 3900 has had several upgrades to enhance its capabilities. The existing controls... 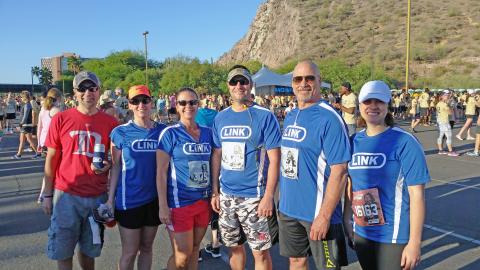 This past April, members of the LINK family laced up their running shoes and headed to Tempe, Arizona for the 13th Annual Pat’s Run. This 4.2 mile race is about much...